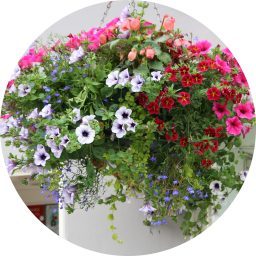 St. Mary’s Pleasance  Garden (www.haddingtongarden.com) is maintained for the public by the charity Haddington Garden Trust. The garden occupies 1.6 acres adjacent to the churchyard. Some of the garden’s boundary walls were built by Napoleonic prisoners of war. The design reflects the features of a 17th century Scottish garden. There is a mount, a sunken garden, boxed hornbeam walk, cottage garden, orchard and meadow, period rose border and raised herb beds.

The pleached allee of laburnum is its most spectacular feature in May and June. The trees in the orchard represent varieties from the 17th to the early 20th century, including white Melrose, Galloway pippin, Stobo Castle and Stirling Castle.

The meadow is planted with spring bulbs and wild flowers to provide a display of snowdrops early in the year to oxlips in April. Summer wild flowers then take over after a mid-summer mowing. This year work has focussed on replanting of the area which was a derelict rose hedge between the sunken garden and the main lawn that was cleared in 2017. After consultation it was agreed that what was missing from the garden was topiary- a popular feature of the period but, for whatever reason, one missing from the Pleasance.

A grant enabled the Trust to address this and after a lot of preparatory work through the year yews were planted in the autumn, with Nepeta, Paeonias and Gladiolus byzantium. Once established the yews will be gradually shaped to create a stately feature that will also maintain the important open views from and towards Haddington House while the underplanting will create seasonal colour and ground cover not reflected elsewhere. The ‘Bookbug’ events organised by the Library Service attracted close to 400 children and parents. Youngsters from the Pear Tree Nursery regularly visit St Mary’s Pleasance during the year.

The eight-acre Amisfield Walled Garden (www.amisfield.org.uk) is being restored and developed by volunteers of the Amisfield Preservation Trust for the enjoyment and benefit of the public and, in particular, the health, well-being and education of the local community. Over the past twelve years, the garden has been transformed from a neglected and overgrown wilderness into a beautiful garden space and thriving community facility. The garden is leased by the Trust from East Lothian Council for a peppercorn rent and is open to the public free of charge.